If You See A Coin Placed On Someone’s Grave, Here’s What It Means

by Jamie Allar | On Grief and Grieving

Have you ever seen coins left on headstones – particularly of servicemen and women? 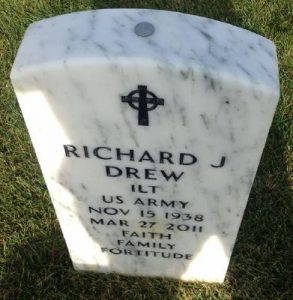 While people have been leaving mementos at or near the graves of loved ones probably for as long as humans have walked the earth, a somewhat more recent tradition has developed involving coins at the graves of deceased soldiers, left by visitors paying their respects.

According to this tradition,

Leaving a penny means you visited the grave.

Leaving a nickel means you and the deceased soldier trained at boot camp together.

A dime means you served with the soldier.

A quarter is especially significant, indicating you were there when that soldier died.

Excavations of the oldest known graves have uncovered personal items such as pottery, weapons, food, clothing, and beads. Since death in many societies has been viewed as a crossing over from one world to the next, these were either the possessions of the deceased that it was expected they would want to take with them, or items donated by the living to be used by the deceased in the next world.

The use of metal coins as a medium for facilitating trade dates to at least the late 7th century B.C.  About this time, coins began to be included in graves of the departed, likely as just another way to equip the departed for the afterlife.

Some cultures added specific purposes for coins being left with the dead.

In Greek mythology, Charon the ferryman of Hades required payment for his services of transporting the deceased into the world of the dead, or else the departed would be left to wander the shore for a hundred years. A coin was therefore placed into the mouth of the departed to provide payment for the journey across the rivers Styx and Acheron.

In England and the U.S. for many years, pennies were often placed on the closed eyes of the dead, some thinking that this would keep the eyes from opening during public viewing, to the alarm of guests or family.

Items such as flowers and even personal mementos are frequently left at graves by families and loved ones, particularly on special days or observances. 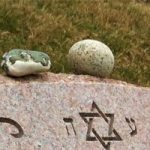 A long-observed Jewish tradition that may have led to the tradition of the coins, is to leave a small stone or pebble on top of the headstone, just to show that someone who cared had stopped by.

Coins (especially pennies) have been left by others to demonstrate that the deceased has not been forgotten, and that loved ones still visit. 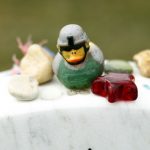 Sometimes these small remembrances may have special meaning to the deceased, known to the visitor.

One piece of military tradition that may also have given rise to the tradition of coins on the headstone of a deceased soldier is the challenge coin. 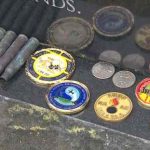 These tokens identify their bearers as members of particular units, and are thus prized and cherished by those to whom they have been given. Any challenge coins found at grave sites are almost certainly left there by comrades-in-arms of the deceased, as an ultimate token of respect.

The earliest known mention of the tradition of the four coins has been traced to about 2009, making it perhaps a more recent tradition, yet one that is still no less meaningful to those who observe it.

Jamie Allar
Jamie Allar is a certified funeral planner and the founder/owner of Epilogue Planning Professionals LLC. Jamie specializes in helping people plan funeral arrangements for themselves or for a loved one, ensuring a smooth and meaningful experience during a difficult and emotional time. For assistance with funeral pre-planning contact Jamie today by email or at (715) 571-4160.