What Does Each Flag Fold Mean?

by Jamie Allar | On Grief and Grieving 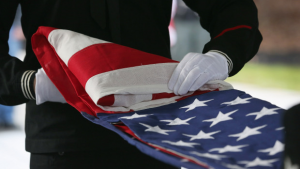 You’ve seen it – perhaps you’ve wondered. Whether the flag is lowered at night, or removed from the coffin of a fallen soldier, police officer, or fireman, the flag is never simply gathered up. It is handled carefully and folded reverently, as a sign of respect.

But did you know that the flag is folded 13 times – one time for each of the original 13 states – and that each fold is given a meaning:

The second fold symbolizes our belief in eternal life.

The third fold honors the veteran departing, having given a portion of his or her life for the defense of our community and country.

The fourth fold symbolizes our human weakness. As American citizens trusting in God, it’s to Him we turn to in times of peace as well as in war, for his divine guidance.

The fifth fold symbolizes a tribute to America. “Our country, in dealing with other countries, may she always be right, but it is still our country, right or wrong.” (Steven Decatur)

The sixth fold symbolizes where our hearts and allegiances lie. We pledge allegiance to the Republic the flag represents.

The seventh fold is a tribute to our armed forces, who dedicate themselves to the protection and defense of that Republic from all enemies, foreign and domestic.

The eighth fold is a tribute to the one who entered into the valley of the shadow of death, that we might see the light.

The ninth fold is a tribute to motherhood – for it is through their faith, love, loyalty, and devotion that the character of the American people is molded.

The tenth fold is a tribute to our fathers – for it is their example of strength, honor, and leadership that inspires  us to press onward through difficult times.

The eleventh fold is a tribute to the heritage and wisdom of the ancient kings David and Solomon, and their steadfastness of faith and leadership.

The twelfth fold represents the emblem of eternity, and glorifies God.

The thirteenth fold fold leaves the stars facing outwards, surrounding the folded flag and reminding us that “In God We Trust”.

After the flag is completely folded and tucked in, it has the appearance of a 18th-century cocked hat, ever reminding us of the revolutionary soldiers who served under Gen. George Washington and the sailors and Marines who served under Capt. John Paul Jones. 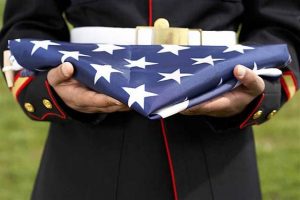 These are followed by their comrades and shipmates in the U.S. Armed Forces, preserving for us the rights, privileges and freedoms we enjoy today.

The source and the date of origin of above flag folds is unknown. Some sources attribute it to the Gold Star Mothers of America, while others to an Air Force chaplain stationed at the United States Air Force Academy. Some consider it to be an urban legend. Nevertheless t is provided as a patriotic service to all.

Traditional grave site military funeral honors include the silent folding and presentation of a U.S. flag, three rifle volleys and the playing of “Taps.” 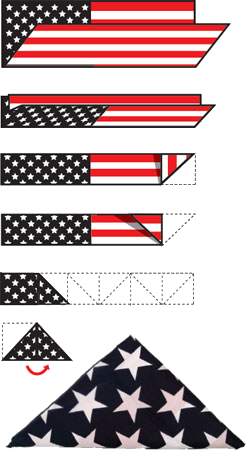 Jamie Allar
Jamie Allar is a certified funeral planner and the founder/owner of Epilogue Planning Professionals LLC. Jamie specializes in helping people plan funeral arrangements for themselves or for a loved one, ensuring a smooth and meaningful experience during a difficult and emotional time. For assistance with funeral pre-planning contact Jamie today by email or at (715) 571-4160.